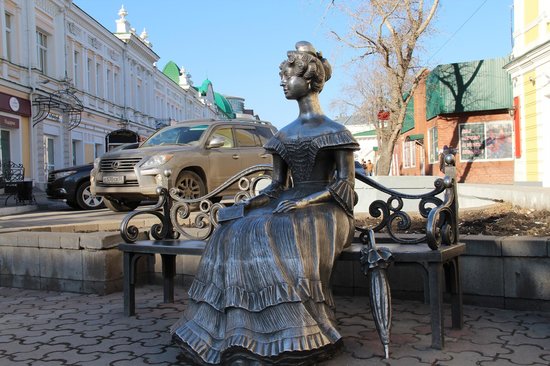 Statue “Lyuba” – one of the most popular attractions of Omsk. Located a few meters from the legendary “locksmith Stepanych” she attracts many tourists, who consider it their duty to take pictures with a bronze statue. The monument, which adorns the center of the city, was erected in honor of the wife of the governor of Omsk Gustav von Gasfordta.Love story of a real sad enough. The fate measured out her short life – she died at a young age, picked tuberculosis. In Omsk young wife of the governor arrived in the middle of the XIX century, leaving the parental home and his beloved, whom her father thought unpromising. Soon after his arrival Luba beginning to miss our home, relatives and beloved boy. Grim she walked through the house, and soon fell ill and died.When it was decided to install a monument, its authors had not easy, because up to now it has not reached any portrait or photograph the governor’s wife. Therefore, to become a sculptor produced, based on the memoirs of contemporaries and surviving evidence. The memory of Luba was immortalized not only sculpture – in the XIX century urban grove was named after her, as well as one of the city streets.